The inshore coastal areas of the Fitzroy Region provide important habitat for green, loggerhead, hawksbill and flatback turtles. Olive ridley and leatherback turtles have also been recorded in the area. All species of marine turtles are listed as vulnerable or endangered under both State and Federal legislation. Marine turtles are at risk from boat traffic where a boat strike usually causes trauma from propeller damage to the carapace (their shell). Scarcity of seagrass as a food source causes stress to turtles, especially to green turtles, whereas other species such as Loggerheads, which have a more diverse diet, can be more resilient. During the 2010–11 floods, stranding records for turtles along the coastal catchments increased considerably, an indication that food sources were affected and resulted in many turtles starving.

Click on the thumbnails below for a larger image 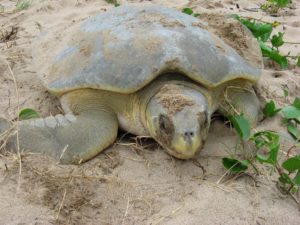 Major nesting sites (rookeries) are found at Peak Island and Wild Duck Island, and a smaller rookery on Curtis Island. It is estimated that about 10% of the global population of Flatback turtles nest at these two rookeries.

Unlike other turtles that have oceanic phases to their life cycles, flatback turtles remain within the waters of the continental shelf. Flatback turtles spend most of their time in sub-tidal soft bottom areas of the Reef, coming ashore to nest on sandy beaches. They mostly eat squid, soft corals and jellyfish. 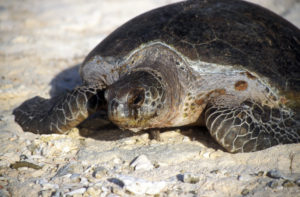 Green turtles spend their first five to 10 years drifting on ocean currents. Once they reach 30–40 cm shell length they settle in foraging habitats such as coral and rocky reefs and inshore seagrass beds. Green turtles mainly feed on seagrass and algae. They migrate from foraging to nesting grounds (on average 400 km), usually returning to the same island beach to nest, between October and March. 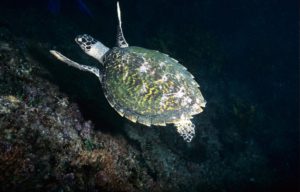 Hawksbill turtles spend their first five to 10 years drifting on ocean currents. Once they reach 30–40 cm shell length they settle in foraging habitats such as coral and rocky reefs and inshore seagrass beds. Hawksbill turtles feed almost exclusively on sponges. Like green turtles, they migrate long distances from foraging to nesting grounds. 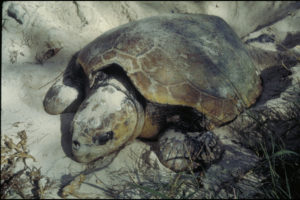 Loggerhead turtles are found in tropical, subtropical and temperate waters around the globe. In Australia, loggerhead turtles are found in Western Australia and the southern Great Barrier Reef, where major nesting areas are concentrated in coastal areas around Mon Repos, the Capricorn-Bunker Group of islands and the Swains Reefs. The Australian population is estimated to be 2–4% of the global population.

Like many other turtles, juvenile loggerheads drift in ocean currents for about 15 years before returning to foraging sites. Loggerheads use a wide variety of habitats, feeding on bottom dwelling invertebrates such as molluscs. They nest on sandy beaches from November to March.