The Great Barrier Reef World Heritage Area supports between 1.4 and 1.7 million tropical seabirds that visit the region to feed and roost, including 22 species that use the islands and cays to breed. Many of these seabird species are resident in the Fitzroy Region, while others visit as part of their annual migrations, such as the common tern. From October to March, wedge-tailed shearwaters and black noddies nest on all 15 vegetated islands in the Capricornia Cays as well as Lady Elliot Island to the south. 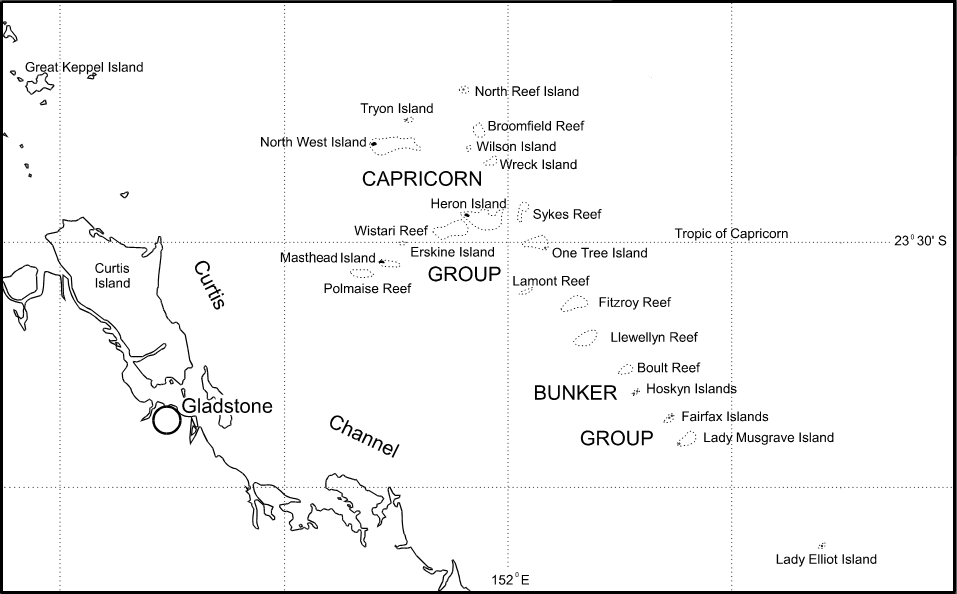 Islands of the Capricorn-Bunker Group, the focus of sea bird nesting in the Fitzroy Region (from Hemson & McDougall 2013).

Coral cay vegetation, particularly pisonia forest, provides important nesting sites in the region; however, some changes in nesting numbers and species have been noted in the Fitzroy Region, including both declines and shifts in nesting (see table below). For example, Frigate Cay in the Swains Cays lost vegetation cover in 2009–10 due to tropical cyclone Hamish and did not recover, resulting in a loss of seabird nesting habitat for tern species and more exposed nesting sites for other seabirds, such as boobies. Thomas and Bylund cays (Swains Cays) were also swamped by the storm surge of tropical cyclone Hamish, terminating nesting effort for that year.

Studies of long-term monitoring data of breeding seabirds documented breeding and non-breeding populations of seabirds in the Fitzroy Region, as well as some population trends. At Heron Island, wedge-tailed shearwaters use seasonally available prey that declines both seasonally and annually due to changes in productivity at lower trophic levels. The Capricorn-Bunker Group has breeding tern and booby species that are also typical of the offshore Swains Cays, as well as roseate terns and red-tailed tropicbirds. In contrast, common noddies and masked boobies are less common. Winter breeding is more common in the Capricorn-Bunker Group and total breeding activity has declined in recent years.

The Swains Cays and Bell Cay generally have high levels of breeding activity for many species of seabirds. The species that typically breed in the area are lesser frigatebirds, masked boobies, brown boobies, common noddies, and bridled, black-naped and crested terns. Fairy terns nesting in New Caledonia have recently been found to visit the Swains Cays during the non-breeding season. Little terns and roseate terns have a breeding population on the Reef that is supplemented by a larger summer non-breeding population that nests elsewhere during the southern hemisphere winter. Roseate terns are relatively common in the Swains Cays but only about 40% breed on the Reef. Decreases were noted in brown booby and silver gull populations, attributed to reductions in food availability.

Seabirds are relevant to a number of matters of national environmental significance, and many of the region’s breeding and non-breeding seabirds are listed threatened species and 23 are listed migratory species under the Environmental Protection and Biodiversity Conservation Act 1999. Many of the Reef’s shorebirds and seabirds are listed under international treaties for the protection of migratory birds. In addition, the number of breeding seabird species is included in the Statement of Outstanding Universal Value for the Great Barrier Reef World Heritage Area.

In this time of a changing climate, there is growing concern about seabird species with foraging strategies and prey species that are strongly influenced by climatic conditions, particularly the offshore and pelagic foraging seabirds. In the southern part of the Fitzroy Region, there have already been incidences of serious nesting failure of wedge-tailed shearwaters. These failures are closely correlated with reduced availability of their pelagic prey as a result of the El Niño Southern Oscillation cycles and higher than average increases in sea surface temperatures and the interaction between the two.

Shorebirds feed on the mudflats and beaches of Reef islands and the adjacent mainland. Several species are resident all year and breed on remote island and mainland beaches. Hundreds of thousands of migratory shorebirds from the northern hemisphere use the Reef as a wintering ground, or on passage to and from wintering grounds further south.

Click on the thumbnails below for a larger image