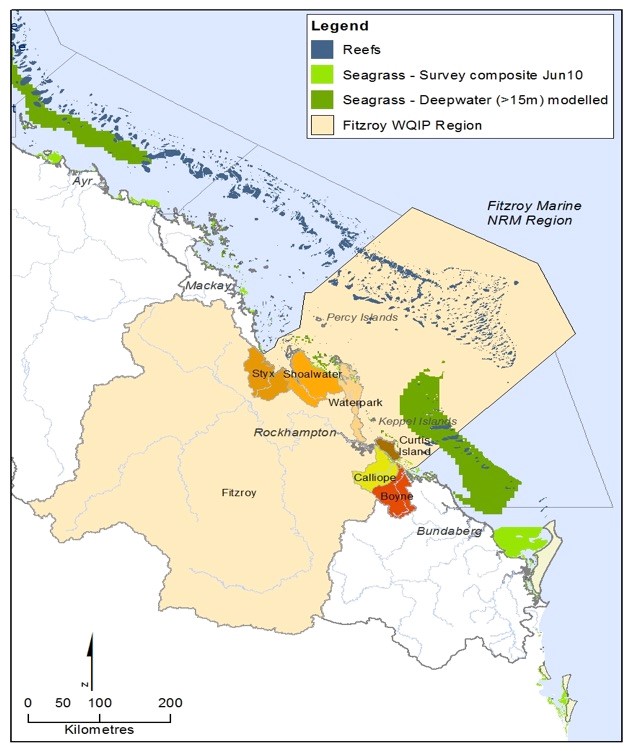 The marine ecosystems of the Fitzroy Region include coral reefs, seagrass meadows, coastal wetlands, estuaries and islands. There are 125 islands in the region, including Curtis, Facing and Townshend islands, the Keppel Island Group and the Capricorn-Bunker group of islands offshore. Some of the species found on these islands are listed as threatened or vulnerable, and have significant cultural values (see table below). The area is part of the Great Barrier Reef World Heritage Area, which was internationally recognised for its outstanding natural values in 1981.

Important tourism industries use the Keppel and Capricorn-Bunker islands and reefs, and recreational beach activities occur along the coast. Recreational and commercial fisheries target reef fish, mud crabs, barramundi and mangrove jack. Finfish are also grown in coastal aquaculture ventures. The military’s Shoalwater Bay Training Area has been managed by the Department of Defence since 1965.

Click on the tabs above to explore the Marine Ecosystems of the Fitzroy Region.

Follow this link to obtain monitoring results for the health of Port Curtis.

Click on the map at right to view the location of coral reefs and seagrass beds off the Central Queensland coast.

Relative Risk Results for Marine Areas within the Fitzroy Region